A Common Pest of Potted Plants 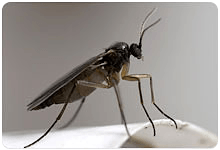 What are these tiny gnats that seem to hover around plants but are attracted to work areas and land on computer screens?

Fungus gnats appearing inside of homes and offices are usually associated with house plants. They become a nuisance when they emerge in large numbers and hover around lights and windows. Fungus gnats are very tiny, appear to be mosquito like with delicate long wings, and are dark gray in color.

How Do They Get In?

Fungus gnats are usually brought in on potted plants. Potted plants or flowers that have been delivered to celebrate an event may be a source of the infestation. Seasonal plants such as poinsettias or chrysanthemums may be the source. Potted plants that are kept outside in the summer and then brought into the home or office in the fall may also be the source.

Where Do They Breed?

Fungus gnats live and breed in soil that is damp and rich in organic content. Stir the soil of these plants with a stick and smell for a sour odor. A sour odor signals the presence of fungi in the soil which usually results from over-watering. The habitat of fungus gnats is not limited to indoor plants. Outside, fungus gnats may be found in accumulations of dead leaves, rotting firewood, compost piles, and in heavily mulched areas that are shaded and constantly over-watered. Infestations have also been found in walls or ceilings where an undetected leak was present, in pet feces at the bottom of cages, and in the drip pans under refrigerators.

What Is Their Life Cycle and Development?

The female fungus gnat deposits her eggs on the surface of soil that is damp and rich in organic content. Eggs hatch in 4 to 6 days. The larvae appear long and thin (almost threadlike) and feed for 12 to 14 days on fungi, organic material, and plant roots. After full growth the larvae stop feeding, spin a silken cocoon in the soil and transform into pupae. Within 5 to 7 days a new adult fly emerges, mates, and begins to lay more eggs. The life cycle from egg to adult varies with temperature and other conditions but will average 18 to 26 days.

No, fungus gnats do not bite humans. They do not have biting mouthparts. They can be a nuisance as they hover around in search of suitable resting and breeding sites.

How Do You Get Rid of Them?

The key to control is finding and eliminating all of the breeding sources. Careful inspection is important. Look for both large and small potted plants. The eggs and larvae can be killed by drying out the soil. The larvae tend to live in the top layer of soil. Stir or overturn the top two to three inches of soil to speed drying. If the top layer of soil remains dry the larvae will die off and the adults will not have a suitable place to lay more eggs. Adjust the watering schedule to prevent the soil from becoming too moist. Conversely, be careful because too little watering may cause leaf drop and/or weaken the plant making it susceptible to fungus gnat larval damage. The soil may be treated with an appropriate potted plant spray that is commonly found in supermarkets, garden centers, and florist shops or by a licensed interior plantscape specialist. The common method is to use an insecticide as a .drench. so that the first one to three inches of soil are made wet. This kills the larvae and interrupts the breeding cycle. Alternatively, a bacterial soil drench containing Bti (Bacillus thuringiensis), commonly available as Gnatrol or Knock-Out Gnats, may be applied.

How Do You Prevent Them From Reoccurring?

Inspect plants before purchase for signs of infestation. Always use sterile potting soil. Make sure there is good drainage inside the pot and do not over-water. Allowing the soil to dry as much as possible without injury to the plants is effective in killing many of the larvae. House plants taken outside during the warm weather may become infested with insects. Inspect these plants before they are brought back inside and consider the use of an appropriate potted plant insect spray on the soil and foliage.

What About the Adult Flies, What Happens
to Them?

Once the larvae feeding in the plant soil have been killed, the adult flies will die off in a week to ten days. The adult flies may be trapped by using yellow sticky cards placed close to or directly on the surface of the soil. Adult fungus gnats may also be captured on the sticky boards inside of insect light traps. In severe situations, and only as a last resort, it may be necessary to treat localized areas with an aerosol spray containing natural pyrethrins.