Yellow Jackets and Hornets make their presence known just after July 4th and continue on until the first frost. In the late summer and early fall when their populations peak, the yellow jackets. normal diet of spiders and other insects disappears and their feeding habits become a problem to human activity as they forage for food at picnics and other outdoor activities. Yellow jackets tend to defend their nests vigorously when disturbed. Their venomous stings can result in life threatening situations, especially for people allergic to yellow jacket venom.

When and Where Does the Nest Start? 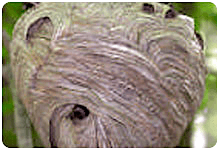 On warm days in late April or early May a fertilized queen emerges from her overwintering site to look for a suitable place to establish a nest. She attaches a fiber (pedicel) to a twig, branch, or wall and begins to construct a number of cells. Common nesting sites include wall voids, old rodent burrows, compost piles, and hollow spots in trees. Those nesting in wall voids look for broken mortar joints, small openings under eaves, and void spaces behind gutter boards. Some yellow jacket species will build a free hanging “bag” nest in a shrub, on a tree branch, under an eave, or attach it to a shed. It will take about a month before the first born workers are mature and ready to assume the duties of the colony.

What is the Life History of the Yellow Jacket
and Hornet?

After the queen starts the nest and the first brood of workers is mature the workers gradually assume the duties of nest building, food gathering, brood care, and defense. The queen remains in the nest and continues to produce eggs as the nest is enlarged. By late August there may be 1000 to 2000 or more workers in an average size nest. All of the workers are sterile females. During this peak time the colony produces the new queens and males. They emerge from the nest and mate. The males die quickly. The newly fertilized queens search for a protected place such as under bark of a tree, in broken mortar joints, behind gutters, or in attics to overwinter. The original nest begins to dwindle in the fall and the founding queen and all her workers die with the onset of cold temperatures. A new colony cycle begins the next spring. The old nest is not reused.

What is the Nest Made Of?

The nest is constructed by the workers who search out wood, bark, and other cellulose debris. This material is chewed and mixed with a salivary secretion until it is a paper like pulp and then shaped and formed into the nest. The combs are built in tiers. Yellow jackets and hornets always envelope their nest by an outer paper covering. The common paper wasp constructs an open comb and does not cover the

While the nest is being enlarged, the workers hunt for protein, nectar, fibers, and water and will travel over 1000 feet in search of food. They scavenge in garbage cans, trash dumps, barbecue grills, and are particularly fond of parks, zoos, and camp sites where food items are abundant. Yellow jackets are beneficial around gardens and agricultural crops because they will feed on caterpillars, flies, and other insect pests. However, in the late summer after the new queens are produced and leave the nest, the workers are no longer attracted to the high protein foods that were needed to feed the developing larvae. Instead, they focus on carbohydrates, sweets, and liquids. Now they are found foraging around patios with outdoor dining, concession stands, trash containers, bakeries, pop cans, etc.

What if I Get Stung?

People having a known high sensitivity should avoid contact with yellow jackets. If abnormal swelling, hives, wheezing, dizziness, or difficulty breathing or swallowing results from a sting seek medical attention immediately. Itching, minor pain, and localized swelling can be somewhat reduced with an ice pack and/or any of the over the counter products such as Sting Kill Swabs.

Should I Plug up the Entrance Hole?

NO! This only causes them to become very disturbed as the temperature rises in the nest. They will find a way out which is usually through a wall into a home or building.

What is a “Breakthrough” Event?

Sometimes the nest site chosen by the queen is not large enough to support the growing colony. When this occurs the workers will deposit moisture on the adjacent plasterboard to soften it and begin chewing. A wet patch is likely to be visible on a wall or ceiling. A breakthrough occurs when the workers chew a hole through the wallboard and emerge into the living space of the home or apartment. If this occurs, open windows to let them out. Close the door in the room where they emerged and put a towel under the door. Turning on the air-conditioner to lower the temperature slows down the activity of the yellow jackets until help can arrive.

How do I Control Them?

Before starting any control efforts, always read and follow the directions on the label of the product you are using. Study the activity and flight pattern. Know where the entrance to their nest is located.

If the nest is in the ground or in a wall void: First determine the natural opening or entrance way and study their habits. In the evening they are less active. Use a flashlight covered with a red cellophane (they cannot see red) and carefully approach the nest. Make sure your arms, hands, and head are covered with protective gear. Use APICIDE powdered insecticide and squeeze about 3 to 5 ounces of material into the nest opening. Try to force the powder well back into the void. There may be activity for up to 3 days after the treatment. If there is no activity after 3 days you may seal up or repair the opening.

As described above, approach the nest in the evening and follow the same precautions. Use APICIDE or another wasp and hornet jet spray killer and direct the material into the opening of the nest. Be careful not to jar the nest while you are treating it. Expect activity to continue for up to 3 days. If there is no activity after 3 days you may remove the nest and discard it in the rubbish.

Note: DO NOT USE KEROSENE, GASOLINE OR ALCOHOL AND TRY TO BURN OUT A NEST! YOU MAY CAUSE MORE DAMAGE AND PERSONAL INJURY. 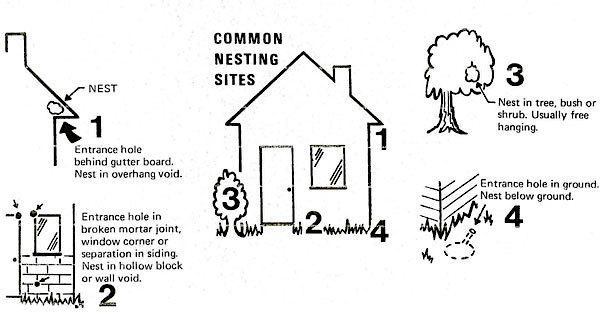 Get email notifications about General Pest Control news and announcements.