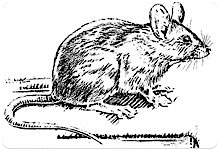 The house mouse (Mus musculus) is considered one of the most troublesome and economically important rodents in the United States. They are found in and around homes and commercial buildings and thrive under a variety of conditions. House mice consume and contaminate food meant for humans and pets. They cause damage to structures and property by gnawing and leaving fecal pellets and urine and they are capable of spreading disease.

Droppings, fresh gnaw marks, and tracks indicate areas where mice are active. Mouse nests, made from fine shredded paper or other fibrous material, often are found in voids and other sheltered locations. House mice have a characteristic musky odor that identifies their presence. Mice are active mostly at night, but can be seen occasionally during daylight hours.
House Mouse Facts

House mice are small rodents with relatively large ears and small black eyes. They weigh about 1/2 ounce (15 grams) and usually are light gray in color. An adult is about 5 1/2 to 7 1/2 inches long, including the 3- to 4-inch tail.

Although house mice usually feed on cereal grains and seeds, they will eat almost anything. They are sporadic feeders, nibbling tiny bits of food here and there. Mice have keen senses of hearing, smell, taste and touch. They are excellent climbers and can run up any rough vertical surface. They will run horizontally along wire cables or ropes and can jump up 12 inches from the floor onto a flat surface. Mice can squeeze through doors where there is more than a 1/4 inch gap and through holes the size of a dime.

In a single year, a female may have five to ten litters of usually five or six young each. Young are born 19 to 21 days after mating, and they reach reproductive maturity in six to ten weeks. The life span of a mouse is usually nine to twelve months.

Sanitation – Proper sanitation is an important step in controlling house mouse populations. In particular, eliminate places where mice can find shelter. They cannot survive in large numbers if they have few places to rest, hide, or build nests and raise their young. Total elimination of mice through sanitation, however, is almost impossible. Mice can survive in small areas with limited amounts of food, moisture, and shelter. Most buildings where food is handled or stored will have problems with house mice, no matter how clean they are if they have not been “mouse-proofed.”

Traps: Trapping is an effective control method for controlling house mice. Although time-consuming, it is the preferred method in homes, garages and other structures, where only a few mice are present. Trapping has several advantages: 1) it does not rely on inherently hazardous rodenticides; 2) it permits the user to view his or her success; and 3) it allows for disposal of trapped mice, thereby eliminating dead mouse odors that may occur when poisoning is done within buildings.

Simple, inexpensive wood-based snap traps are effective. Traps can be baited with a variety of foods such as peanut butter, chocolate, raisins, gum drops, bacon, and string. Set the triggers lightly so the traps will spring easily. In difficult situations you can leave the baited traps unset until the bait has been taken at least once to improve effectiveness and overcome any trap shyness that may exist.

Use enough traps to make the effort short and decisive. Set traps behind objects, in dark corners and in places where evidence of mouse activity is seen. Place them close to walls so mice will pass directly over the trigger (see illustration). Traps can be set on ledges, on top of pallets of stored materials, or any other locations where mice are active.

Glue boards are an alternative to snap traps. Glue boards mainly catch and hold young mice that are scurrying around. The older adult mice learn to avoid glue boards and are strong enough to pull themselves off. For best results place glue boards along walls in suspected runways. Do not use them where children, pets or wildlife can contact them.

Rodent-proof construction: Mouse-proof construction is the most successful and permanent form of house mouse control. “Build them out” by eliminating all openings larger than 1/4 inch through which they can enter a structure. Steel wool or copper mesh may be stuffed into holes. Seal cracks in building foundations and openings for water pipes, vents, and utilities with metal or concrete. Doors, windows and screens should fit tightly. Cover the edges of doors and windows with metal to prevent gnawing. Latex, plastic, rubber, wood, spray foam, or other gnawable materials are unsuitable for plugging holes used by mice.

Multiple-dose (anticoagulant) rodenticides: Multiple-dose anticoagulant rodenticides cause death as a result of internal bleeding, which occurs as the animal’s blood loses the ability to clot and capillaries are damaged. The active ingredients are used at very low levels, so bait shyness does not occur when using properly formulated baits.

Mice often feed on anticoagulant baits for several days before death occurs. Fresh bait must be made available to mice continuously for at least two weeks, or as long as feeding occurs. Vitamin K is an antidote for most anticoagulant rodenticides and needs to be administered by a physician or veterinarian.

Bait selection and placement: Several types of anticoagulant baits are available. Grain baits or pellet forms often are purchased in bulk or packaged in small plastic, cellophane, or paper packets. These “place packs” keep baits fresh and make it easy to place baits into burrows, walls, or other locations. Mice will readily gnaw into place packs and feed on baits. Anticoagulant baits formed into paraffin blocks are useful in damp locations, crawl spaces, outside under porches, and other areas where loose grain baits spoil quickly.

Proper placement of baits is important for house mouse control. Place baits no more than 10 feet apart in areas where mouse activity is evident. If mice are living in wall spaces, place baits inside plumbing voids and pipe runs, above suspended ceilings, and in attics.

The use of bait stations is recommended when applying any toxic bait. They protect baits from weather and provide a safeguard to people, pets, and other animals. Place bait boxes next to walls (with the openings close to the wall) or in other places where mice are active.

Establish bait stations in and around the exterior perimeters of homes and buildings where it is impossible to exclude rodents. Place fresh anticoagulant bait in these stations to control invading mice before breeding populations become established. Label all bait containers and bait stations clearly with appropriate warnings.

Pick up all accessible dead mice after a poisoning program. Use rubber gloves or tongs and dispose by wrapping them in paper or place in a plastic bag and close it tightly before placing it with your household garbage.

Electronic devices: Although mice are easily frightened by strange or unfamiliar noises, they quickly become accustomed to regularly repeated sounds. Ultrasonic sounds, those above the range of human hearing, have very limited use in rodent control because they are directional and do not penetrate behind objects. They also lose their intensity quickly with distance. There is little evidence that electronic, sound, magnetic, or vibrational devices of any kind will drive established mice or rats from buildings or provide adequate control.

Predators: Although cats, dogs, and other predators may kill mice, they do not provide effective mouse control in most circumstances. Mice often live in very close association with dogs and cats. Mouse problems around homes often are related to the food, water and shelter provided for the pet.