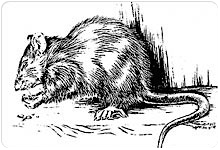 Rats can be detected by their droppings or evidence of fresh gnawing. Darkened areas called .rub marks. are visible on surfaces where rats rub their bodies. Tracks can be seen in mud and on dusty surfaces. Burrows and runways may be found next to buildings, along fences, and under low vegetation and debris.

Norway rats are robust rodents that usually weigh about 11 ounces. Adults are 13 to 18 inches long, including a 6- to 9-inch tail. Their fur is coarse, brownish and scattered with black hair on the upper surfaces. The belly fur is typically gray to yellowish-white, and they sport a naked, scaly tail. Rats will eat nearly anything, but they prefer high-quality foods such as pet foods, meat, and grains. Rats require water daily especially when feeding on dry food. Rats have keen senses of hearing, smell, taste and touch. They are excellent climbers and use that skill to find food or shelter. Rats can squeeze under doors where there is more than a 1/2 inch gap and through holes the size of a quarter. Rats have litters of six to 12 young, which are born 21 to 23 days after mating. Young rats are sexually mature in about three months. Breeding occurs mostly in spring and fall. The average female has four to six litters per year. The lifespan of a rat is usually 12 to 18 months.

Sanitation: Proper sanitation in and around homes and buildings is an important first step in preventing rat problems. Rats find food in overflowing trash cans and containers without tight fitting lids. Rats will even feed from pet bowls when the food is left outside or on the floor overnight. Good sanitation alone will not eliminate rats under all conditions, but will make the environment less suitable for them to thrive. In situations where it is difficult to remove food such as dry pet food, bags of flour, etc, consider storing these items in sturdy containers with tight fitting lids. Good storage practices are an important part of sanitation. When storing food or other items on the floor allow adequate space under and around the articles to allow for inspection for signs of rat activity.

Rodent-proof construction: The most successful and permanent form of rat control is to “build them out” by eliminating their access to structures. Ideally, all places where food is stored, processed, served or used should be rodent-proof. Seal any openings larger than 1/4 inch to exclude both rats and mice. Openings where utilities enter buildings should be sealed tightly with metal or concrete. Wood, plaster, caulk, and foam will not keep rats out. Use 1/4 in hardware cloth as a backing before caulking or foaming a suspected entry site. Equip floor drains and sewer pipes with tight-fitting grates that have openings less than 1/4 inch in diameter. Doors, windows and screens should fit tightly. It may be necessary to cover the lower edge of doors with flashing or sheet metal to prevent gnawing.

Population Reduction – Rodenticides: Multiple-dose Rodenticides (anticoagulants) The commonly used rodenticides contain anticoagulant materials. Anticoagulants cause death as a result of internal bleeding, which occurs as the animal’s blood loses the ability to clot and capillaries are damaged. The active ingredients are used at very low levels, so bait shyness does not occur. There are both single feeding and multiple feeding anticoagulant rodenticides. With a single feeding product (containing: bromadiolone or brodifacoum) the rat will consume a toxic dose by eating the bait just once. To obtain a toxic dose with a multiple feeding anticoagulant (containing: diphacinone, chlorophacinone, or warfarin) a rat must feed for several days. Regardless of which product is used, it will take three to five days after feeding before death will occur. Fresh bait must be made available to rats continuously for at least two weeks, or as long as feeding occurs.

Bait selection and placement: Anticoagulant baits are available in several different forms: grains, pellets, nuggets, and blocks and are packaged in bulk or in small plastic, cellophane or paper packets. These “place packs” keep baits fresh and make it easy to place baits. Rats will readily gnaw into place packs and feed on baits. Block baits are held together with paraffin and are useful in sewers, damp areas, under porches, and in bait stations located on the exterior.

Before using any rodenticide be sure to read and follow the directions on the label. Poisoned baits are to be placed in areas that are inaccessible to children, pets, and wildlife. The use of sturdy and tamper resistant bait stations is highly recommended. The bait stations protect the bait from weather and provide a safeguard to people, pets and wildlife. Place bait boxes next to the walls (with the opening close to the wall) or in other places where rats are active. On the exterior establish bait stations where trash is stored, around the perimeters of buildings, and other suspected harborage sites and runways.

Rodent Burrows: For direct baiting of rat burrows use loose pellets, nuggets or crumbled blocks and insert the material directly into all active burrows. Replenish bait as needed. Allow 7 to 10 days before crushing the burrows. Add more bait to any burrows that are re-opened and repeat the process.

Safety precautions: Carefully follow all product label recommendations Consider all rodenticides hazardous enough to cause injury or death to humans, pets, and wildlife and place baits where only rodents can access them. Store unused bait, in a locked cabinet out of the reach of children or pets. Pick up all accessible dead rats after a poisoning program. Use rubber gloves or tongs, wrap the carcasses in several layers of newspaper, and dispose of them in the trash collection. In the event of an accidental ingestion or poisoning from an anticoagulant rodenticide, consult the label and or call your local poison control center.
Norway Rat

Traps: Mechanical Traps. Trapping can be an effective method of controlling rats, but it requires more skill and labor than most other methods. It is best to try trapping first in homes, garages, and other small structures where only a few rats may be present. Trapping has several advantages: 1) it does not rely on inherently hazardous rodenticides; 2) it permits the user to view his or her success; and 3) it allows for disposal of trapped rats, thereby eliminating odor problems which may occur when poisoning is done within buildings.

There are several kinds and styles of rat traps. Wood based snap trap, plastic based expanded trigger snap trap, plastic jaw style trap, and wire cage traps. Choose the trap that best fits the situation and your budget. Bait traps with a small piece of spicy meat such as a .slim jim., pepperoni, hot dog or bacon tied securely to the trigger. Leave traps unset until the bait has been taken at least once to reduce the chance of rats becoming trap-shy. Set traps close to walls, behind objects, in dark corners, along suspected runways, and in places where rat droppings are found. . Place traps so rats will pass directly over the trigger when following their natural course of travel. Use enough traps to make the effort quick and decisive.

Glue Boards: An alternative to traps are glue boards, which catch and hold rats attempting to cross them in much the same way flypaper catches flies. Choose boards that are at least 5. x 9. with a thick glue pad. Place glue boards along walls or in other areas where rats travel. Tape the boards to the floor so the trapped rodent does not drag it away. Do not use them where children, pets or desirable wildlife can contact them. Environmental conditions affect glue boards. They lose their effectiveness in dusty areas unless covered. In extreme cold the glue may lose some tackiness and not hold a rodent and in extreme heat the glue may seep or leak off the board.

Get email notifications about General Pest Control news and announcements.