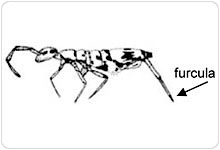 Springtails cause alarm to homeowners when they appear suddenly in large numbers in kitchens, bathrooms, and other rooms where there is likely to be a source of moisture. They usually appear in the spring and early summer but can be found all year round. These very small, leaping insects do not bite humans, spread disease, nor damage household furnishings. They are usually only a nuisance by their presence. They enter homes and buildings through doorways, screens, or other openings. Buildings with constant high humidity may be overrun with springtails.

Springtails are tiny, wingless insects about 1/16 inch (1 to 2 mm) long. Colors vary from among the different species. They get their name from the ability to catapult (leap) through the air three to four inches by means of a tail-like mechanism, called a furcula, which is tucked under the abdomen. When disturbed, this appendage functions as a spring, propelling them into the air away from the danger source. The young immature stage resemble adults except for size and color.

They live in soil, leaf litter, mulch beds, under bark, in decaying logs, in greenhouses, and in the soil of over-watered potted plants. Populations are often very high, up to 100,000 per cubic meter of surface soil, or many millions per acre. Most feed on algae, fungi, and decaying vegetable matter. Others feed on plant roots or nibble on young plant leaves and germinating seeds. Actually, they are beneficial by reducing decayed vegetation to soil (they are good recyclers). Homeowners hardly notice springtails until they move indoors. The insects tend to invade homes and buildings during and after periods of weather extremes such as very hot and dry conditions or heavy rains. As the soil/mulch dry out, the insects move. They can easily climb the sides of houses and are attracted to lights. Because of their attraction to lights, they may enter homes lured by lights shining through windows such as from a night light in a kitchen or bathroom or a glowing television or computer screen left on after dark. They can also be brought into homes in the soil of potted plants. Indoors they may breed in areas with high levels of humidity that occur near leaks, foundation cracks, damp crawl spaces, or over-watered potted plants.

Indoors: Springtails cause no problems inside the house, except they are a nuisance. Populations can be quickly removed by vacuuming them up and then disposing of the bag outside of the house. Alternatively, they can be knocked down by misting the areas where they occur with a dilute solution of dishwashing soap in water (6 -10 drops in a pint of water). The soapy water suffocates and/or drowns them. If you find them in the soil of potted plants, let the soil dry outside for several days before bringing the plant indoors. Be careful not over-water plants inside the house.

When a chemical control is needed, apply the insecticide to the cracks and crevices where the springtails may enter the house such as along edges, corners, window frames, door thresholds, etc. and to other places where springtails might occur.

Outdoors: The sudden occurrence of a large indoor population of springtails may be an indication that large numbers are surrounding the structure. First, try the non-chemical control methods. Look for and remove breeding sites. Look for moisture accumulating on the ground from a dripping air-conditioner or a leaking sprinkler head. Compost piles and decaying vegetation should be removed from areas close to the house. Mulch should only be 2-4 inches deep and kept aerated so it remains dry most of the time. Do not over-water mulched landscape plants and let the soil dry between watering plants. Make sure that the ground is sloped away from the house and that moisture and piles of leaves do not accumulate in window wells. Look for tell-tale signs of moisture such as moss growing on the ground.

When a chemical control is necessary apply the material as a barrier treatment with special attention to areas where springtails may enter the home or building. It is typical to treat 1 to 2 feet up the foundation wall and 1 to 2 feet out. Treat around basement windows, window wells, door thresholds, and under the siding where it laps the foundation. It may also be necessary to treat mulched flowerbeds and the base of shrubbery. In areas with moist conditions and high organic matter, it may be necessary to apply treatments several times during the warmer weather to maintain control.