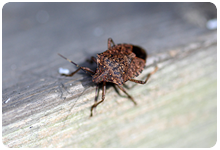 At three-quarters of an inch long, stink bugs have been pestering neighborhoods throughout the east coast and other various states since the late 1990s. Residing in most regions in this country, (brown marmorated stink bugs exist in 80% of the states), stink bugs thrive on agriculture—ranging from gardens and fruit trees, to farms, to even weeds, and can become a groundskeeping dilemma.

Originating from Asia, stink bugs, also known as shield bugs, received their moniker for the stench they spray when feeling threatened and their shield-shaped bodies.

What is the growth and development of a stink bug like?

The lifecycle of a stink bug ranges from six to eight months and goes through three metamorphoses, beginning life by hatching from an egg to morphing into a nymph (youth) to adult. Stink bugs develop flight in adulthood and a fully grown stink bug may be identified as an adult by their wings.

What do they eat?

Stink bugs are known for their ravage of agriculture—ranging from garden weeds and flowers to fruit trees to entire fields of crops, including cotton and soybeans. Often detrimental to plant life, these pests can wreak havoc on farmland and can destroy crops just as rapidly as they breed. Stink bugs thrive on fruit, and fruit trees especially can be a target of these insects’ destruction.

Where do they nest?

Beginning in the fall, if there is any type of open nook and cranny, stink bugs are going to find a way to move into your home. The cold is coming and they can sense that your home will be a warm place to hind out during the coldest months of the year. The smallest crevice, including cracks in siding, slits in screen doors, busted seams in windows and even chimneys can all provide a warm welcome for stink bug entry.

Stink bugs, once nestled inside your home, will stay snug inside walls and crevices—so discreet that you most likely will not be aware of their presence until the spring when they begin to emerge. The worst part is that the more stink bugs congregate in one spot, the more others feel invited to join, meaning that a mild stink bug problem can quickly intensify if not treated.

After the long winter, if you don’t immediately see them you will begin to smell them. Named stink bugs for a reason, they can emit a putrid smell if disturbed and can also leave unsightly stains on fabrics and furnishings. Once the weather heats up outside, the bugs will start to emerge and have enough energy to flutter around and look for an escape to the outside world.

Why do I have stink bugs now?

Stink bugs begin their home infiltration when the weather begins to cool down at summer’s end. Searching for a warm place to hibernate the winter months, stink bugs will enter any which way they can.

Stink bugs, like moths, are attracted to artificial light and a simple porch light can send a welcome signal for stink bugs to occupy your home.

When Spring arrives, stink bugs want to be outside and it’s quite common for them to come out in droves to leave their inside nests for the great outdoors.

How do you control stink bugs?

Whether it be by patching, sealing or full-on replacing, your best line of defense is covering up any type of crack, opening or crevice that invites the intruders into your home to nest. Something as simple as an extra layer of caulking around windows or patching a screen door can provide a much needed, additional layer of protection.

Because stink bugs are attracted to light, simply switching to yellow bulbs or warmer colored lighting for your outdoors can be a deterrent while still providing a light source for your porch or patio. This is a simple, budget-friendly switch that can help prevent invasion.

There are also many natural ways to alleviate a stink bug problem. With ingredients you may already have in your home, combine a solution of vinegar, hot water and dish soap into a spray bottle and spray directly on the bugs. This simple recipe proves to be effective with the most basic ingredients and doesn’t involve the use of harsh chemicals.

Essential oils can also serve as a natural bug repellent. Mint and eucalyptus are two very common oils proven to be effective at warding the bugs away. Protect your home from these pests by spraying your garden and any openings in your home with a solution of essential oils and water in a spray bottle.

Already invaded? If you see just a few, vacuuming them up can sometimes solve the stink bug problem. Pro tip: if vacuuming, ensure you are using a vacuum with a bag, as you will want to throw the bag away!

The Team at General Pest is Here To Help

If the suggestions above don’t keep the stink bugs from invading your space, the team at General Pest Control has a comprehensive treatment plan for your property. Contact us today to find out about our seasonal pest control program or to schedule a one-time service.